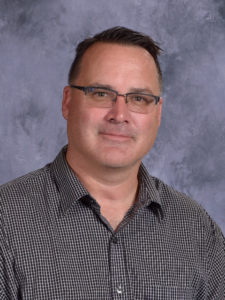 Mr. Patrick Ruddy serves as the Director of Bands at Harbor Springs Schools.  During his time at Harbor Springs, his ensembles have consistently received superior ratings at band festivals, 1st place finishes at marching contests, along with awards for Best Jazz Band at the NMU Jazz Festival.  In addition, he has had students perform with the All-State High School Band as well as members of the Michigan Youth Arts Festival.  In addition to his position at Harbor Springs, he serves as an instructor with The Cavaliers Drum and Bugle Corps, from Rosemont Illinois, and is a staff member with the Michigan Ambassadors of Music, a high school honors band that travels throughout Europe every two years.

Prior to his arrival, he was the Director of Bands at Flushing Community Schools.  While at Flushing, the high school marching band consistently ranked among the top ten bands in Michigan in Flight II.  While teaching at Flushing High School, Mr. Ruddy was also a lecturer at the University of Michigan-Flint where he taught undergraduate courses in music education including topics in elementary band, as well as marching band techniques.

Before he worked at Flushing High School, he spent four years as the Director of Bands at Goodrich high school and nine years as the Associate Director for the Plymouth-Canton High School Marching Band.  While at Plymouth-Canton, he helped lead the band to multiple Bands of America Regional and three National Championships.  During this same period, he was part of the instructional staff with the Cavaliers Drum and Bugle Corps from Rosemont Illinois, which consistently placed in the top five, including two first place finishes, at the Drum Corps International World Championships.  He continues to be an active designer, clinician, and adjudicator for high school and college bands throughout the country.  To date, he has designed over 300 shows for high school and college marching band, drum and bugle corps, winter percussion, and winter color guard programs.

He received his formal training at the University of Michigan-Flint where he earned a Bachelor’s degree in Music Education, with a History minor.  He then earned a Master’s degree in Wind Conducting at Michigan State University.

He, along with his wife Tanya and twin daughters Eva and Ella, are very thankful to be part of the Harbor Springs Community.